During a steam sale I like to browse the indie games. I quite like indie games because they often take a creative risk that the big AAA games don’t. The problem is that without the backing of a major developer they need to get their start-up money from somewhere. In the past I’ve coughed up money for games such as Natural Selection 2 years before the game was even out! So during a steam sale I like to look at the up and coming indie games and buy a couple. For a couple of quid I don’t mind trying a game out, if the game fails to deliver then I’ve lost nothing.

This steam sale I stumbled across a game in beta called Contagion. The idea is pretty simple; to make a coop game based around the old stumbling style of zombies based around basic puzzles instead of the fast paced action packed coop games in the vein of Left 4 Dead.

The main game mode is called escape and sees up to 8 players try to work their way through a map full of zombies to escape a situation. The puzzles are pretty basic and usually involve finding an item to open a door or barrier. Each time you play the game the route changes, keys change location, different doors are unlockable/open, one game saw the team using vents to get around the map instead of taking the stairs. The zombies are easy enough to kill but a lack of ammo and limit to the number of things you can hold means that you often resort to using risky melee weapons. The limits on holding 5 things at once mean that through the game you do things such as swap a key for machine gun with no ammo(in the hope you will find ammo) only to find that the armory later in the game is locked..

It’s all good fun until you die. Players who die (or join mid game) spawn as a zombie, and while it sounds fun to chase you ex-team mates through the level, it isn’t. Zombies  spawn anywhere on the map making it take ages to get to the humans. If you spawned because you joined late you won’t know which layout the map has decided to make and get get lost pretty quick and if Humans shut doors behind them it will take you forever to smash them down. Zombies are pretty weak and by the time you’ve found the humans one well placed headshot will take you down.  Still, if you can avoid becoming a zombie then escape mode is pretty good. 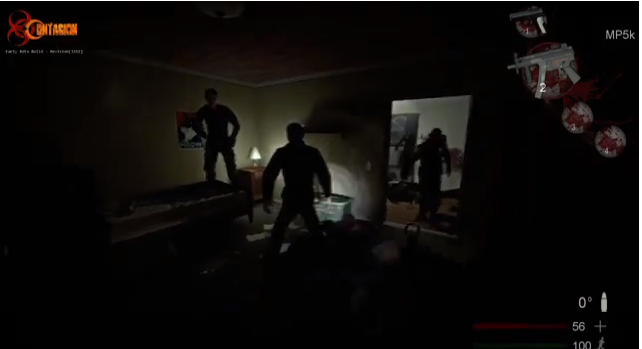 I don’t ever remember the game being too dark, but looking back at some videos I made it did seem it. The fact I didn’t notice it in game makes me wonder if they have perfected flashlight usage.

Deathmatch sees up to 8 players battling it out on medium sized maps filled with zombies. While not strong the zombies are a great addition to the fight. The match is slow paced and it can be quite hard to find other human players, following a hoard who can smell human blood is a great way to track people down. Other ways to find humans include following flashlights, which works great when you see a small flash in the front room of the house next door or following gunshots. Gunshots is a great idea by the developers because at some point human players find themselves cornered in a loft with a zombie they need to take out; unfortunately, unless you have 5.1 sound its unlikely to help locate people that much.

When you die you become a zombie, the same problems plague deathmatch as plague escape; being a zombie is slow and boring. At least the maps don’t change that much on deathmatch so it’s not as easy to get lost.

Finally there is an extraction mode. Here players have to get to an extraction place and fend of zombies until it’s time to leave and defend a different extraction place. I didn’t get much time to play this but again I had the same experience; fun as human, frustration as zombie.

I should point out the game is beta, so there is plenty of time for things to change. I don’t know how being a zombie can be more fun while not making them too powerful for humans. While it takes a while to hunt a human player down in escape mode, this stops the humans getting overran by 5 zombie players. I should also note that while being a zombie was a tad boring, playing as a human was really fun. It was also really tense, death actually meant something to the player and kept you on your toes.

The game is built using a modified version of the source engine by a bunch of indie developers. I think the game was put on kickstater to begin with. I’m a fan of indie games that take creative risks and feel it was well worth the couple of quid, not only for the game but to support the dudes behind it.

I’m giving this 4.5 stars because I’m knowingly taking part in a beta. Perhaps I would give it 3.5 if this was the finished product, but it’s not. Reviewing games at this stage in their life is perhaps a little unfair, but I think its good giving games trying something new and following the kickstarter/green light/beta business models as much coverage as possible.

Very quick video of me running around in the game:

I haven’t played No More Room in Hell. It looks really good tho. Contagion isn’t perfect, but it is a good effort and well worth £2.99 during the steam sale. I’m sure it will improve too. I had a game with one of the devs and he seemed really nice and enjoyed playing with people.

Thanks for the heads up on no more roon

How it looks. (Still the same)
https://www.youtube.com/watch?v=M0z8PxX7dfA