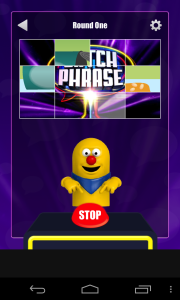 At the bonus board Mr Chips picks a piece of the grid, get the answer right and you can unlock the square.

If you grew up in the 90’s in the uk then the chances are you have fond love for two television programmes. CITV’s Knightmare and  Roy Walker‘s Catchphrase (I know about that Stephen Muhern show, I mean it’s good, but he’ll never be Roy Walker). While a game based on knightmare already exists (on the Amiga, review to come) we’ve had to wait a long time to be able to live the thrill of Catchphrase in our own homes.

Thanks to developers Cube Interactive we can now relive the thrill not only in our our own home, but also on the 6 hour Megabus ride to cornwall as catchphrase comes to our phones.

First off you can play four rounds for free, it seems to have got a little bit of stick on the Google Play forums that you have to pay for the other rounds. Geez some people. Its 70p for 20 rounds. They don’t last long but the animations are high quality, the sound effects match the 90s classic version and Mr Chips is there. The rounds follow the same routine as the show, you see a flashing 4 x 3 grid and press a buzzer. You get a little animation that is supposed to be a catchphrase and you have to guess what it is, although more often than not on the show it was not a phrase at all, but the name of something daft like the name of an actor, that was part of the charm. If you guess correctly you get some points and unlock one of the panels on the grid, behind the panels is yet another catchphrase, the earlier you guess it (with more of the grid locked) the more points you get. Confused, check this video out for an idea:

That’s exactly the sort of high quality entertainment you can only get from catchphrase. 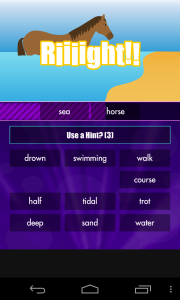 You have to create the catchphrase out of the words at the bottom within the time limit. That well known catchphrase ‘water horse’

No problem for those who can’t type fast. The developers have come up with a system where below each catchphrase you have a number of words and it’s your job to assemble them into a catchphrase. Surprisingly this doesn’t make the game too easy.

Firstly I had a problem after I paid, it didn’t unlock all the catchphrases! I’ve been told this has been fixed now and they offer the paid and free versions seperate to stop the problem happening to anybody else. Secondly it’s a short experience  I do however think the critical reviews on google play aimed at it’s short lifespan are slightly unfair as the animations have clearly taken some time to create and its only 70p. The multiplayer doesn’t work yet, but if it does it would be interesting to see how this works out as anybody who plays the game first and sees the catchphrases will have a definite advantage!

I think cube interactive have done the right thing by outright charging for the app and not trying to sucker you in with the ‘free to play’ where you have to pay £4000 for help unlocking ridiculously hard questions that stop you progressing like some of the guess the logo style apps.

All in all I think it’s a good game, its not a huge download so if you find yourself stuck on train it’s worth the 70p to help you pass the time. The reply value isn’t great but what can you expect from something based around questions and answers? Plus everybody loves Mr Chips. A 4/5 from me. Stars given for great sound effects, smooth gameplay, no crashes and a smart solution for those who can’t type fast, lost a star for short lifespan (guess it can’t be helped) and some early teething problems.