4 games where losing is fun

A new breed of game wants us to know that sometimes it is more fun to lose than it is to win. These games play on the fact that every time we lose we learn something new and a story is told. I think that this a place educational institutions should explore, but until then this is a list of my favorite games where losing is fun. Dwarf Fortress is the daddy of games where losing is fun.

The game sees the players creating an managing a Dwarf Settlement that is drawn on screen using ASCII text characters for its graphics set. This means that developer can throw in new things for the player to manage such as items/characters/monsters in to the mix without having to worry about how they look on screen.

This means there are a lot of items and characters in Dwarf Fortress to worry about, what makes things hard is that they interact with each other in increasingly complex ways. Players will struggle to manage the complexity thrown at them and the Fortress will eventually fall, but a cool story will emerge from the ashes.

My favorite fortress collapsed when some of my dwarfs adopted cats as pets. The dwarfs refused to let me turn them in to cat pie. The cats fell in love and had babies; when then proceeded to have more babies, who in turn had another litter. More of my Dwarfs adapted cats and there was no going back. Soon the fortress was full to the brim and the dwarfs couldn’t work without tripping over a little blighter.

Early version of the game where we see some poor fool setting his kitchen on fire. Byebye supplies.

Project Zomboid is a retro zombie survival game. While it may look retro it doesn’t play like it. It’s a zombie survival game with RPG elements. You have to loot houses, build defences and look for foor and supplies. As the game goes on the hoards of zombies get bigger, the power supply goes, fridges and taps stop working. Fortunatly your survival skills also get better as time goes on, so while you can no longer drink from a tap, you can start building rain collector.

The game can come to an end at any time. Desperate for a drink you forgot to read the label of your bottle? Maybe you just drank bleach. I like the fact you don’t always know if you’ve messed up or not. Am I feeling dizzy because I’ve spent to long in the rain and the feeling will pass or should I be worried about that scratch from a zombie.

Beware those bandits that will let you run 3 miles from a horde of Zombies only to take you out. For the ‘lulz’

Dayz is a multiplayer mod for the game Arma II. A mod so popular it boosted sales of the original game by 300,000 in two months. The aim of the mod is simple; to stay alive in a zombie invested town as long as possible. While it may sound like this game is going to be a lot like project zomboid, it isn’t. On one level it would seen there is less complexity to be found in Dayz than Zomboid as there are less items, less places to loot and no things to build (except to rebuild a helicopter or car, which is as hard as nails). However, the game is multiplayer and the difficulty lies in surviving the other players. There are limited number of  items to be found in the game world  and a friend can be quick to stab you in the back when they discover you have a stash of those all important bandages.

The map layout in DayZ also adds to the creation of a story when the player eventualy loses. All players start near a beach, making it a hotspot for bandits hoping to loot your starting gear. If you survive the early game player controlled bandits you have to make choices, each choice can bring death. Do I stay in the woods where the zombies are scarce but the food even more so? When should I risk a trip in to town or the hospital? DayZ isn’t a fast paced multiplayer game but your life depends on everything decision both you and your fellow players make. Every time you die you’ll remember the decision you made and the player or zombie that took you out . 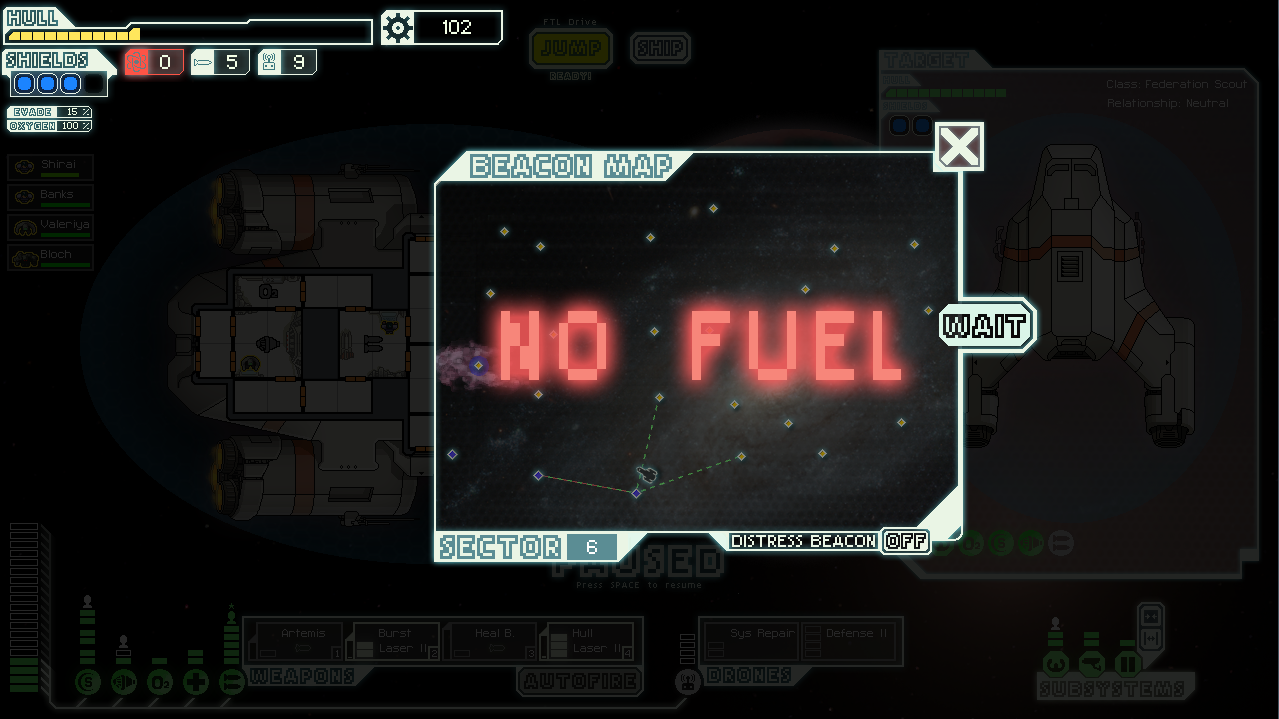 FTL takes its inspiration from science fiction series such as Battlestar Galactica and Star Trek. You manage a small space s

hip crew delivering enemy war plans as they are chased through space by an army of rebels. The gameplay is split in to ‘jumps’. Each jump is a through space and a step closer to your goal. Each jump also runs the risk a space battle with pirates, rebels or

unfriendly aliens. In these battles you must micro manage your crew in a captain kirk style. You make decisions such as should more power go to the guns or sheilds? Should there be two officers in the Engine room in the hope of speeding up your escape or should one be sacrifieced while putting out fires? The consequences of each decision will haunt you in future next jumps. Was it worth sacrificing that crew member for some money to upgrade your rockets?

Faster than light can be won but it isn’t easy. Every time you lose in FTL it will either be because you made a mistake when choosing your course of action or because the constant damages from jumps has brought you down. Both lead to a great player created story of defeat!