What does Twitch have that edX doesn’t?

This week I have logged in to two different platforms in the hope of learning something new. Out of these two platforms the first pone I logged on to was called edX. It is an online platform and I was there to do an online course called ‘Big Data and Social physics’. I have been pretty excited about this course ever since I first heard about it, it is delivered by experts from all over the world on subjects such as complexity, networks, human behaviour and big data. I recognised many of the names listed as being behind the course as leaders in their field and was looking forward to seeing content by them. I am led to believe that edX is a leading MOOC platform written by the clever clogs over at MIT, so even though I hadn’t used it before I was certain that nothing could go wrong. I’ve been on the course since it started and have logged in multiple times but not actually done anything, yesterday I logged in only to find that the course had finished before I had even got started.

I’m not sure why I hadn’t done anything on the MOOC but if I’m being honest I don’t really care, probably because I don’t feel like I’ve let anyone down. I found the whole thing a very lonely experience void of any human interaction, which I guess is quite funny for a MOOC course on social physicals. It’s not that I didn’t try either. The first thing I would do when logging in to edX was find traces of other people. Some places on the MOOC I expected to find people chatting away, working together to digest the course were just empty and dull, the Wiki page gives you to a single link to an academic paper, the videos while well produced with fancy graphics don’t have comments or any other form of feedback I could see. When I made my way to the discussion page I found that the popular threads were all comments about the content, anything that looked like it had a bit of heart (“my view on big data” was the closest thing to having any soul in it) had no replies. 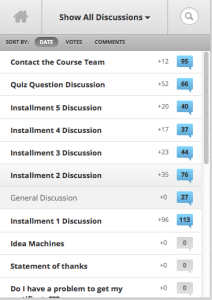 The second platform I logged in to wasn’t something I actually planned on doing, I didn’t set out to take part in any healthy lifestyle course, it just happened. The platform it took place on isn’t even aimed toward hosting MOOCS.

The event took place on Twitch, a platform where gamers share their screens while they are playing games and can interact with their audiance. Other gamers come and talk about the activity-taking place and the player can interact with the people watching. I think the focus on gaming means that it quite often gets written off, either that or it just doesn’t seem to be on the radar of people in education. But Twitch is a big thing, The Wall Street Journal (using DeepField data) recently claimed that they ranked fourth for company traffic during peak hours; just below Apple. They currently employ 5 people to look at the data generated by people and their activities to understand what moves them to do stuff.

The users on Twitch are teaching each other amazing things all based around activities. The Twitch plays pokemon activity was a fantastic exercise of community driven story telling and as players poured in to the activity it became the base for teenagers to explore voting systems.

I’m still not sure how I ended up on a Twitch activity that revolved around healthy living, but I got there without planning it. It was hosted by somebody in the community that was overweight and had built up an audience on Twitch, somewhere along the line his gaming activities had started to incorporate his weight issues and the audience were working with him to improve all their life styles.

I can’t help but think whatever that X factor is that Twitch has that gets people together, doing activities about things they really care about is what edX needs. Google is currently looking to buy Twitch, you would think that the technology that they have with Hangout would be able to do something similar already, but perhaps its more than technology they want.

It’s unfair to ask what Twitch has that edX doesn’t because they are used for different things but I think it raises interesting questions on how you can support the kind of organic activities coming from Twitch, perhaps MOOCs are too much about control?

Hadn’t heard of twitch before David – will check it out – sounds great – we’ll probaly ruin it trying to do something “educational” with it:-)

That’s a good point, what is it education does that sucks the fun out of these things?

[…] now; like work on projects, my PhD, blog, because of the people around me. A few days ago I wrote about a MOOC being a lonely experience and Sheila commented on my post. Sheila made a point that assessment is something that education […]