Thoughts on Agent Based Models and Institutional Systems

Over the past few months I have developed an interest in agent-based modelling using tools such as Netlogo, RePast or Swarm. These tools combined with increases in processing power make it incredible easy to get started and soon sucked me in.

Agent-based models are computation models that are used to make predictions about the interactions of agents in a system and how these interactions may affect the system on a whole. Quite often the systems being modelled are ones where simple small interactions on a low level have a huge effect on the overall system at a higher level such as how greenhouse gasses blocking infrared light might have an effect on global temperature (have a play on the model by Lisa Schultz here!)

After playing with these models I got me wondering about the possibilities of modelling the interactions of agents within educational institutions and how we could use these techniques to explain the emergence of behaviour but at the same time I have worried about how we would validate these models without ‘hard data’.

Here at the University of Bolton we have recently switched VLE to Moodle and it appeared to me that what could seem like a simple process of ‘changing the VLE’ was actually made up of very complex communications and interactions between the staff based here. Using this as a starting point I got together with a colleague and started to create a model that explained how we thought the communications within the University might look and how these communications could be disrupted or improved using technology.

At 2011 Cal Conference in Manchester my colleague Mark Johnson presented the model as a way of explaining how we thought technological interventions could be used to change communications and how this might have an effect on the how the institutions works on a whole.

The model showed the different types of communications between certain groups of people and how these communications could change when they people were placed in different social situations or when technological interventions were made. 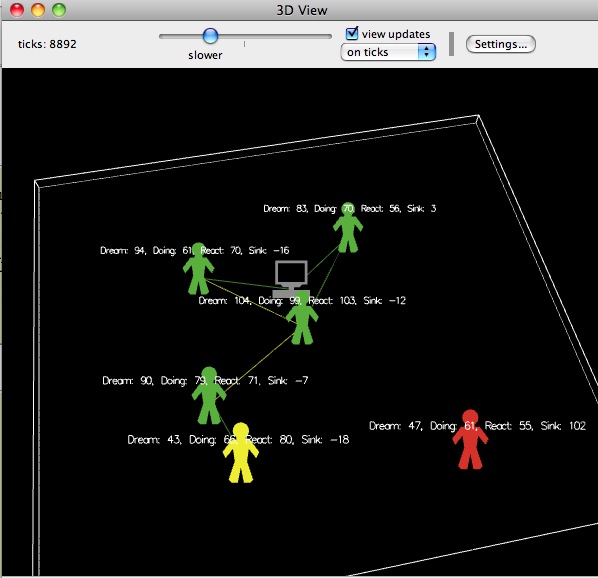 Screenshot of Netlogo’s Patch while the model is running

I thought the response from the audience was great, who did not worry about the validity of the model itself but seemed to find the visual representation of how we thought technical intervention may change communication useful. The reaction of the audience at the session made me realise that a powerful aspect of agent-based modelling might simply be the ability to demonstrate what your view on a problem is.

Sounds fascinating. Would be really interested in a hearing more detail about how you created the models and how they are being used/received within Bolton – follow up post maybe;-)

This is new to me, but it looks so interesting. Will check out some more on this.

Your model is quite interesting. I am writing a NetLogo program on institutional change of land tenure system now. I think your program can be rather helpful. Would you mind to share it with me, please?

Your model is very interesting.

Thanks for the interest Hang, This model is on a old laptop now so I will dig it out and get back to you.

Thank you very much, David. Please send is to my email.

[…] I have been playing with agent based models for a while now, one of the first projects that I attempted was to help a while ago I helped Mark create a model to give life to how they saw communications in higher education and how interventions could change these communications. You can see the model on marks blog read more about it at my CETIS Blog. […]

I am really unhappy with this post, I don’t think it describes what I wanted to get across. It took me two long train journeys to write, I’m fed up of it and don’t want Read more…

It’s good that everyone is talking about loot crates

I’ve written quite a bit on here about how oppressive I find the techniques and progression systems in computer games – particularly, but not restricted to those found in ‘free-to-play’ games. Last year I wrote Read more…

The designers and the mechanics

I am quite interested in issues of automation and the issues that face us when tasks in for workforce are replaced with robots or A.I. In a way, I kind of think that as a Read more…