If you play games on your Android device or iPhone you may have noticed that most of the games are pitched as “free to play”. While they might be free to start playing, they still make a lot of money. In fact, when I had a look at the ‘Top Grossing Android Apps’, 1 out of the top 20 was a paid app and that was the Minecraft juggernaut; all of the others were free to play games. There are three big tricks to free to play games, out of the top games that I have played each one deploys them all. 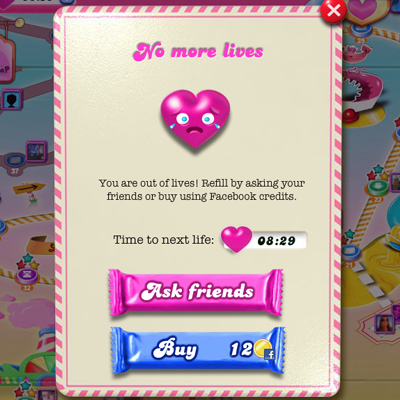 Sorry you failed your module. You can wait 3 years to try again, pay extra to take it now or ask friends to give you another chance

The first of which is to make the game time based. Most free to play games have a limit on what you can do in a short amount of time. Games like Candy Crush Saga give you a certain amount of lives, games like The Simpsons make actions in the game take time, taking X amount of hours to build a virtual building or unlock a new gameplay element. This has been defended by the development companies as them simply understanding patterns of play on mobiles; while defending their game Dungeon Keeper, developers EA claimed it was designed this way because people only want to play for 5 minutes at a time on a phone. Of course the game developers know that people want to play more or charging users for extra lives/to speed up a building would be a pretty rubbish business model.

The second trick is to adjust the gameplay so that you are incredibly disadvantaged without paying. Games like Candy Crush have a system of throwing the player one or two very easy levels followed by a much harder level that can be brought down in difficulty by the use of a costly power up. Games like Plants Vs Zombies 2 throw in a difficult boss that can be brought down to size by power ups that can be gained with a few real life pounds (or by waiting for to earn the ingame money) .  A common grip with gamers is that this affects the design of the game, are you designing a game to be fun or a game to squeeze out as much as it can from the players pockets. There is a conflict of interest for the designer; are they an artist or a businessman?

The third trick is to tie the game in to the players social networks and allow the player to compare themselves to their friends. In Candy Crush you can see exactly what level friends are on and the scores they get. In games such as Clash of Clans you go and see all your friends’ bases and compare how well you are doing compared to them. This comparison with your friends and family is an attempt to spur you in to spending to catch up, remember the whole thing is time based. If your base is not as big as your friends you can wait the six weeks to build the things to catch up or pay a few pounds. You don’t want your friends thinking you can’t play properly.

‘Games are the new normal’

All three of these tricks could be translated in to dirty tricks used by the institution in the game it plays with students and I’ll leave it up to your imagination. The most disturbing thing I find though and the reason I write this post, is the emergence of a fourth trick which is this: All previous tricks must be used to generate positive feedback about the product.

The players of these games find themselves in a meta game when it comes to leaving feedback against the game. Want to build that building at the same rate everybody else is, then like us on Facebook or give us a 5 star android review, if you want some starting gold you better sign in with your Google+ account, the feedback mechanism is part of the game. I’ve heard horror stories of institutions feedback procedures and warning students that if the institution gets bad feedback then their degree is worthless. Students cannot win this feedback game, but equally the institution doesn’t learn anything real about itself. I read a book on the History of western education thought once, chapter one was about the importance of institutions that allow for criticism. I guess they do ‘allow’ it.

If you leave a comment then  I’ll email out a link to a certificate in 3 years from when you’ve left the comment saying you read this post. Infact, You can have it now if you give this website complete access to your twitter feed. I’m not kidding, I’ll give you a certificate. [pwt id=’4′]